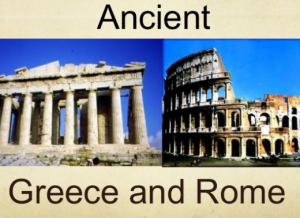 The Greco-Roman world, Greco-Roman culture, or the term Greco-Roman (/ˌɡrɛkoʊˈroʊmən/ or /ˌɡrɛkəˈroʊmən/; spelled Graeco-Roman in the United Kingdom and the Commonwealth).

The beginning of the civilization of Europe (the white people descending from Esua and Japhet) as we know it today, it started with Greece,

And from Greece, it upgraded and spread its territories, its ideologies, its influence, and doctrine through the Roman Empire (Catholic church).

The name “Jesus” is an English word, derives its origin and meaning from the Greek language.

By modern scholars and writers, Greco/Roman also refers to those geographical regions and countries that were directly, long-term, and intimately influenced by the language, culture, government and religion of the ancient Greeks and Romans.

The Greco/ Roman culture derives from the descendants of Esau also known as Edom.

Esau was the father of Greece, Rome, Catholic church, and Christianity, Click here to find out more…